Publication (in Arabic and English), Spring/Summer 2018

Six years after women and men across the Arab world took to the streets during the Arab spring uprisings to call for political reforms, justice and political participation, hopes for a better future are largely destroyed. Instead of democratic change taking root, increasing violence, instability and a rise in authoritarianism are affecting the majority of the countries in the Arab world. Syria is witnessing the seventh year of a brutal conflict to which no end is in sight. Libya, Yemen and Iraq are in the midst of multileveled conflicts leading to militarization and fragmentation of their societies. Other countries in the region are experiencing new levels of authoritarianism which narrow spaces for participation dramatically.

These narrowing spaces are particularly felt by women. Seven years after hopes were high for more equal participation of women in the public sphere, the status of women in the Arab world is more at risk than ever. In the context of conflict and crisis, violence against women and girls is heightened and women’s participation in decision making processes remains strikingly low. Their concerns are continuously being sidelined.

This is especially true for formal peace and security processes from which women are largely excluded or in which women play marginal roles at best. In peace talks across the region, women constitute the missing force and are thus being denied the right to take part in decisions that will shape the future of their societies.

Since the adoption of UNSCR 1325 in October 2010 which calls for the active participation of women in achieving peace and security, there has been very little increase in women’s participation in peace talks. Women continue being sidelined during official peace negotiations. The Iraq and Yemen agreements in 2010 and 2011 did not include any women in mediation, signatures or witnessing. In both cases, the peace agreements were shaky and only led to an increase in political instability, exclusion and marginalization.

This exclusion persists despite a growing body of research suggesting that women’s involvement in peace, security and transition processes is more likely to address issues of justice, reconciliation and accountability and therefore making peace deals more sustainable.

Women’s exclusion from peace talks does not pay justice to the often constructive role women assume in their local communities in order to address and mitigate the effects of conflict; neither does it take into account the social transformations that conflict and uprisings may initiate in many countries when women start claiming a more active role in the public sphere.

To encourage research on women, peace and security and enhance women’s involvement in these processes, the Friedrich-Ebert-Stiftung and Musawa /Women’s Study Center has invited academics, especially from the field of political science, sociology and anthropology, political activists as well as practitioners from the field of civil society/ women’s rights movements to participate in a conference in Beirut from 16 to 18 Nov 2017.

Interested participants were invited to submit abstracts on the following questions:

The above-mentioned questions were be presented in the following three panels:

Uprisings and Conflicts in the Arab World as a catalyst for social transformation?

This panel focuses on the gender dimension of conflicts and popular uprisings, especially on how conflict changes gender roles. While the discussion on gender and conflict mostly concentrates on the role of women as victims, it fails to take into account critical roles women play in conflict and post-conflict at the local level, such as combatants, heads of household, community leaders and peace-builders. In times of conflict, women often push back the boundaries, enter the public sphere and thus challenge restrictive norms and traditions. While examining the new spaces that conflicts open for women, the panel asks whether conflict has the potential to empower women through effecting social transformations. Furthermore, it asks about the societal obstacles for a deep-rooted social transformation.

Although women’s roles in society are often greatly enhanced during conflict and uprisings at a local level, compared to men, relatively few women become involved in formal peace processes, from negotiations that begin in the midst of the conflict through all the phases of the transition to peace. This is a particularly big draw-back for women “because it is precisely at the peace accords where the foundations for a future society are often set, where important gender issues should be addressed and where a gender perspective on peace should be incorporated.”  This panel examines possible explanations for this absence and explores counter strategies. Through case studies from countries that underwent conflicts and popular uprisings, the panel examines post-conflict phases and asks whether there is a return to the (patriarchal) pre-conflict status quo? It furthermore sheds light on the strategies used by women in order to achieve greater representation in political decision making processes and inclusion in peace and security processes. Related to that it poses the question to what extent women in decision-making positions defend women rights and establish processes that lead to a greater representation of women in the political sphere.It also critically assesses the international community’s role in advocating for equal participation of women and men and asks whether external pressure to open political spaces for women has proven effective in supporting women’s aspirations for greater participation.

Conflict as an opportunity to change existing power structure. How can civil society contribute?

FES & Musawa / Women's Study Center will publish the contributions of 23 speakers in both English and Arabic in the spring/ summer 2018. 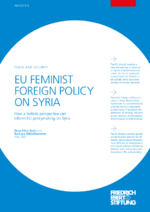 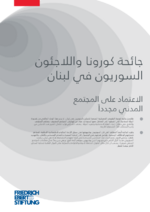 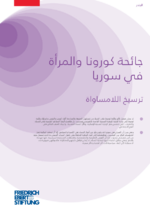